A Christmas Mumming: The Play of Saint George 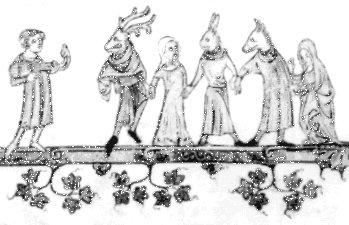 (In the midst of much singing, dancing and feasting, enter some mummers or performers, led by Father Christmas, who is swinging a mighty club.)
Father Christmas:
Here come I, old Father Christmas, Welcome , or welcome not. I hope old Father Christmas Will never be forgot. I have not come here to laugh or to jeer, But for a pocketful of money and a skinful of beer. To show some sport or pastime, Gentlemen and Ladies, in the Christmas-time. If you will not believe what I now say, Come in the Turkish Knight! Clear the way.
(Enter the Turkish Knight.)
Turkish Knight:
Open the doors and let me in! I hope your favors now to win; Whether I rise, or whether I fall, I'll do my best to please you all. Prince George is here, and swears he will come in; And if he does, I know he'll pierce my skin. If he does not believe what I now say, Come in the King of Egypt!-Clear the Way!
(Enter the King of Egypt)
King of Egypt:
Here I, the King of Egypt, boldly do appear. Prince George, Prince George, walk in, my son and heir! Walk in , my son, Prince George, and boldly play thy part. That all the people her may see thy wondrous art.
(Enter Prince George.)
Prince George:
Here come I, Saint George; from Britain have I sprung. I'll fight the Dragon bold, for my wonders have begun: I'll clip his wings, he shall not fly; I'll cut him down, or else I'll die. The Dragon:
Who's he that seeks the Dragon's blood And calls so angry and so loud? That English dog, will he before me stand? I'll cut him down with my courageous hand. With my long teeth and my scurvy jaw Of such as he I break up half a score.
(Prince George and the Dragon fight; the Dragon is killed.)
Father Christmas:
Is there a Doctor to be found All ready, near at hand, To cure the deep and deadly wound And make the Champion stand!
(Enter a Doctor, holding a bottle of medicine under his arm.)
Doctor:
All ready, near at hand, To cure a deep and deadly wound And make the champion stand!
Father Christmas:
What can you cure?
Doctor:
All sorts of diseases, Whatever you pleases, The phthistic, the palsy, and the gout. Whatever the disorder, I soon draw it out.
Father Christmas:
What is your fee?
Doctor:
Fifteen pounds is all my fee, The money you lay down. But since 'tis such a rogue as he, I'll cure him for ten pound. I have a little bottle of Elucampane: (to the actor who impersonates the Dragon.)
Here Jack, take a little of this flip-flop, Pour it down thy tip-top, Then rise and fight again.
(The Doctor gives him the medicine. The Dragon comes to life again, and fights with St. George, and is killed again.)

Prince George:
Here I am, St. George, a worthy champion bold, And with my sword and spear I've won three crowns of gold. I've found the fiery dragon and brought him to the slaughter; And with that I've won fair Sabra, the King of Egypt's daughter.
(The Turkish Knight advances.)
Turkish Knight:
Here come I, the Turkish Knight, Come from the Turkish land to fight, I'll fight St. George, who is my foe, And make him yield before I go: He brags to such a high degree He thinks that none can do the like of he.
Prince George:
Where is that Turk that will before me stand? I'll cut him down with my courageous hand.
Turkish Knight:
Oh! Pardon me, Prince George, pardon of thee I crave. Oh! Pardon me this night and I will be thy slave.
(They fight; the Turkish Knight is defeated and falls on one knee.)
Prince George:
I'll never pardon a Turkish Knight, So rise up again and try thy might
(They fight again, and the Turkish Knight is killed. Father Christmas calls once more for the Doctor, who appears quickly and cures the Knight. Then the Doctor is given a basin of "girdy grout," following which he is given a kick and driven out by the actors. Then Fair Sabra, the King of Egypt's daughter, appears and goes toward Prince George to become his wife.)

Father Christmas:
So, ladies and gentlemen, your sport now has ended. Therefore, behold this box, which is highly commended! The box would speak, if it had but a tongue, Come throw in your money and think it no wrong. (Father Christmas starts collecting money in his box.)